The history of Patshull Park Hotel

The history of Patshull Park, or “pattes hall” has much depth.  There has been a manor house at Patshull since before the Norman Conquest; a population of nineteen was recorded in the Doomsday Book, but there is no record of there ever having been a village of Patshull.

Patshull Hall from the East

The family who lived at Patshull Hall, were for three centuries the Astleys. They supported the King during the Civil War and were firstly created Knights and then Baronets for their loyalty after the Restoration (1660). They sold the Estate in 1765 to Sir George Pigot, and it remained in that family until 1848.

Sir George Pigot was lord mayor of Bridgnorth and in turn Governor of Madras. Having made his fortune as a Nabob in the colonies he was the owner of the famous Pigot diamond; its is said he purchased the Patshull Hall Estate for a sum for 100 thousand guineas and immediately engaged his friend Lancelot [Capability] Brown to landscape the park for him.

In 1848 Sir Robert Pigot (George’s heir) sold the Estate to William Legge, Earl of Dartmouth, of Sandwell Hall near West Bromwich, for his son Viscount Lewisham who came to reside here later the same year. The names of all those families are found in various forms in the local area, mainly as the names of the public houses (The Pigot Arms in Pattingham). Patshull Park remained in the Dartmouth family until 1958 when it passed to the Crown in lieu of death duties. During the Second World War the house was used as a Rehabilitation centre for the wounded Servicemen, and was used for the same purpose for civilians from 1966. Patshull Park Hotel was completed in the grounds in 1980. The hall, which can be seen today from the golf course, was largely built in the 1730s with extensive additions in 1850 by Lord Dartmouth. The former House was considered “old and low” by Sir Richard Astley in 1698, but it had been described earlier in the century as “the most accomplished and delicious mansion in the whole country”….fashion had obviously changed! Sir Richard died before the new Hall was built, the work being carried out under the direction of his son Sir John Astley. Once the new Hall was completed Capability Brown landscaped the grounds, and work on the Great Pool began in 1768. The Doric Temple, which now forms part of the hotel was built in 1754. Famous events at Patshull Hall included the visits of the M.C.C. to play cricket in 1875 and 1876, a new pavilion being constructed especially.

In 1900 the Duke and Duchess of York, later to become King George V and Queen Mary, stayed at the Hall; Queen Mary was to stay at the Hall again in 1939. There has been a Golf Course on the Estate in an area known as High Park since the beginning of the twentieth century, the present course was designed in 1978 and completed in 1979.

Set within the grounds of Patshull Hall, this 18th century church replaced an earlier medieval church upon the site. The buildings stands in lovely parkland beside a lake.
St Mary’s was built by architect James Gibbs for Sir John Astley in 1744. Gibbs also built the nearby manor house. In 1874 the church was expanded by adding a north aisle, belfry, and dome. From the exterior it presents a very Italian neo-classical appearance, with a restrained west tower surmounted by a cupola and roundel windows in the tower and over the classical south portico that serves as the main entrance.The interior boasts some very nice memorials to members of the Astley family, dating primarily from the 16th and 17th centuries. The most imposing is probably that of the founder, Sir Thomas Astley, which features recumbent effigies of the deceased and his wife.
Another striking Astley monument shows Sir Richard Astley leading a squadron of horsemen, flanked by seated figures of his two wives.The church is no longer used for regular worship and is in the care of the Churches Conservation Trust – at present it is the only church in Staffordshire in the care of the CCT.

The Earl of Dartmouth Inspecting Scouts at Patshull Hall – 1912

The first recorded use of Patshull Camp was in 1912 when it hosted the South Staffordshire combined camp.  There are also records that it held various District camps and also the Midland Counties Rover moot in 1936. The present Scout site came into use in 1946 and besides this, there used to be a Sea Scout site and a Guide site. These were located near to where the hotel is, but closed when the Crown agents redistributed the lease of the land. Patshull became part of the Crown estate from 1958 when the Earl of Dartmouth died and the family were unable to pay the death duties. A fire in 1979 badly damaged the Golf house and an appeal was launched to re fit it out. In 1980, a consortium negotiated with the Crown to take over the lease of the land including where the present campsite was located for the use of shooting. The consortium was headed by Mr Trebble and consisted of members of the Dartmouth family and the Hotel. The Dartmouth family were keen for the links to be maintained with the Scouts, but wanted to return the Golf house and surrounding area to how it was at the turn of the 19th / 20th century, which was a trout farm and hatchery. As part of the agreement, the scout site was to be moved to a site near to the Hall known as Pickens Goss. The consortium went bankrupt in 1981, and so the relocation never occurred. As a result of this bankruptcy, the lease on the Sea Scout site, which was more or less used exclusively by 35th and 37th Wolverhampton’s, 2nd Bushbury, and a Birmingham Group was terminated. 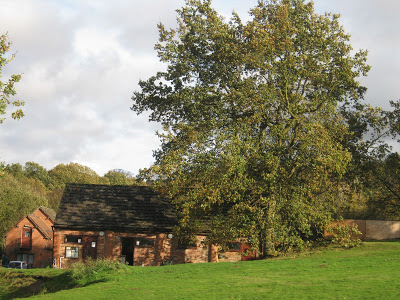 In 1985, an emergency meeting was held to discuss the future of Patshull campsite due to its loss-making situation. It was pointed out by the County Commissioner, Eddie Gribble, that Beaudesert had been turned round into a profit-making situation and there was no reason why Patshull couldn’t be either. After some discussion it was agreed that the Districts would continue to support it. In the early 1990’s, the barn was converted to contain a warden’s den and indoor general room. At the end of the 1990’s, interest in Patshull seemed to be growing, especially by Groups outside of the Borough, thus ensuring its continuing existence. Credit: Patshull Hall BlogSpot & Wolverhampton Scout Society

We hope that you’re as interested in the history of Patshull Park as we are, and we love to share the information that we learn.  There are new findings coming up all the time and we’re always excited to write about what we know.  Here are some more blog posts that we’ve written.

For more information on all aspects of Patshull Park Hotel between Wolverhampton and Telford in Shropshire, please take a look around the website, or call us on 01902 700100.
Get In Touch